Q: We will be landing at Barcelona Airport and then embarking on a Cruise leaving a few days later. I would like to stay at a reasonable hotel in an area accessible to the Port. I will be with a party of 6 people. Could you suggest some hotels?

A: I recommend you see our cruise port hotel map below. You can see the location of the cruise port and the hotels close to it. We have provided a scale so that you can calculate how far the hotel is from the cruise port. If you then click on one of the hotels found on the map, you will see a popup box if you then click on the link in that box you will be taken to our page to read our review of that hotel. You would then have enough information to make your own decision as to which is the best choice hotel to meet your needs. Below the cruise hotel map, we have also provided a table of all the hotels that are on the map. You will notice 2 numbers on the circles. The number in the upper half of the circle is a unique reference number used to identify that hotel and corresponds with the numbers in the table below the map. In this way, you can see which hotel on the map relates to which hotel in the table below the map. The number in the lower half of the circle is the star rating of the hotel. The colour circles representing the hotels have also been colour coded for the star ratings. We have also provided a link to booking your hotel if you wish.

The nearest hotel to the Barcelona cruise terminal is the Eurostars Grand Marina Hotel.

For other hotels near to the Barcelona cruise ships and terminals we recommend you consider hotels near La Rambla which is Barcelona's most famous street and close to the cruise terminal and port area.

Hotels near the Barcelona Cruise Terminal. Click on any of the circles to go to a page to read our in-depth review of that hotel. 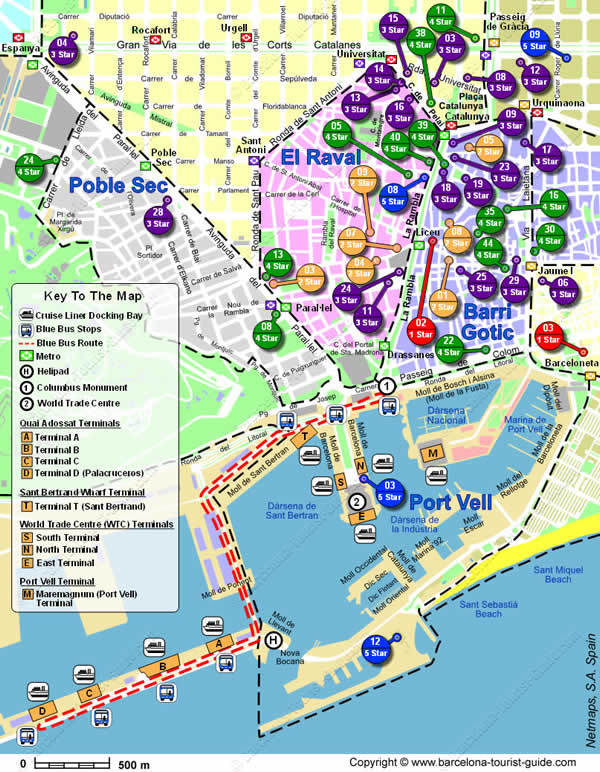 Back To The Top Of The Page

COVID Testing
At Your Hotel
Antigen or PCR

Qualified medical staff comes to your place to perform your test