On this page you'll find an introduction to Barcelona Gaudí Architecture and find out why his work is so important in Barcelona.

Gaudí's work is admired by architects around the World as being one of the most unique and distinctive architectural styles.

His work has greatly influenced the face of Barcelona architecture and you will see stunning examples of Gaudí's work all around the city centre.

Antoni Gaudí was born in Reus in 1852 and received his Architectural degree in 1878.

From the early beginnings his designs were radically different from those of his contemporaries. Gaudí was not so much influenced by other architect's ideas but more by forms of nature.

You will see that most of Gaudí's constructions have an organic look to them. This basic concept of using nature as the primary influences for his creativity is reflected in the use of the natural curved construction stones, twisted iron sculptures, and organic-like shapes - all of which are characteristic traits of Gaudí's architecture.

If you look at the Façade of Casa Batlló for instance you will see that the balconies look like skulls and the supports on the windows look like bones. The multicoloured tiles that are used to decorate the walls of Casa Batlló were taken from the colours of natural corals.

Gaudí adorned many of his buildings with coloured tiles arranged in mosaic patterns. This adds another important dimension to his buildings which is so often overlooked by architects - the use of colour. The combination of original design, interesting shaped stonework, and vibrant colours in Gaudí's work give the viewer a truly breathtaking visual experience.

To give you an outline of Gaudí's style we have prepared separate pages reviewing a selection of Gaudí's work.

Sagrada Familia is a giant Basilica, probably Gaudí's greatest works, and is the No.1 most visited attraction in Barcelona.

Park Güell is a magical park with amazing sculptures and tile work designed by Gaudí. You will also find Gaudí's old home in Park Güell which is now open to the public as a small museum. 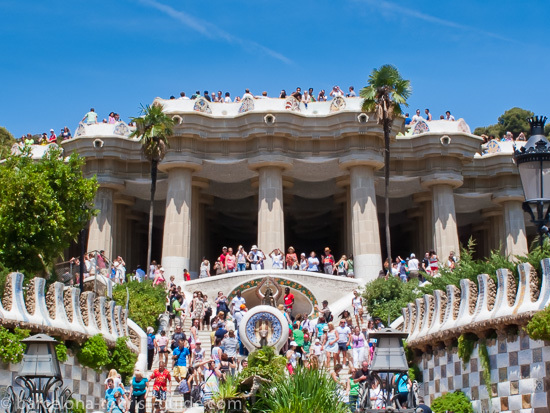 La Pedrera (1905), also known as Casa Mila, is another of Gaudi's masterpieces and can be found at No 92 Passeig de Gràcia at the junction with Carrer Provenca. La Pedrera is open to the public to visit their rooms along with the roof top area. To find out more visit our detailed pages on La Pedrera below.

COVID-19 Update: La Pedrera management have setup special procedures during these times of the coronavirus to ensure the safety of all tourists visiting. You can read their detailed safety procedures by following the link below.

One of the most interesting and unusual houses on Passeig de Gracia in Barcelona.

If you would like to see more photos of Barcelona Gaudí's work we suggest you visit our Barcelona Photo Guide Map page. On this page we have a map showing the locations of important landmarks in Barcelona and linked them to an extensive photo guide to the city. The landmarks you need to looks out for are the three we have listed above along with La Pedrera.

If you would like to learn more about Gaudí's Park Güell and Sagrada Família then consider going on the guided Gaudí tour. The tour includes entrance fees, bus transportation and tour guide.

Gaudí architecture - Sagrada Família - A giant Basilica and Gaudí's greatest works. The No.1 most visited attraction in Barcelona.

Park Güell - A magical park with amazing buildings, sculptures, and tile work designed by Gaudí. You will also find Gaudí's old home in Park Güell which is now open to the public as a small museum.

Back To The Top Of The Page